Craft in the Bay is the exhibition and craft retail space of The Makers Guild in Wales.

Located on the “Flourish” at the south end of Lloyd George Avenue in Cardiff Bay, the gallery is opposite Wales Millennium Centre and is close to the iconic Senedd Building.

We pride ourselves on being the regional hub for Craft and Applied Art in the Capital of Wales. We curate and host an exhibition programme of the finest National and International exhibitions, along with craft workshops, community based projects and work with Schools, Colleges and Universities.

Craft in the Bay is now recognised by Cardiff Council as one of the Capitals most significant Cultural and Heritage destinations. The Gallery is an Award winning Heritage Building, being short-listed for a RIBA award and receiving a “highly commended” at the British Archaeology Award in 2004.

About the Building - The “D Shed”

The “D Shed” is one of the last remaining mid-nineteenth century buildings in Cardiff Bay and has a Grade II listing.  It appeared on the first edition Ordnance Survey map from surveys carried out in the 1880s.

The building is glass-fronted on two sides to provide views into the exhibition space and features a modern extension, designed as a contrasting element, which accommodates demonstration studios, conference space, office and a café with a dramatic pointed roof projecting over an outside seating space.

The grade II listed structural elements were taken down in 1999 and stored in Cardiff Docks and re-erected in 2001/02 on its present site on the Flourish opposite Wales Millennium Centre in the heart of Cardiff Bay. The present building incorporating the structural metal elements of the ”D” shed with a contemporary extension was designed by Noel Architects and built by Mowlem South Wales. 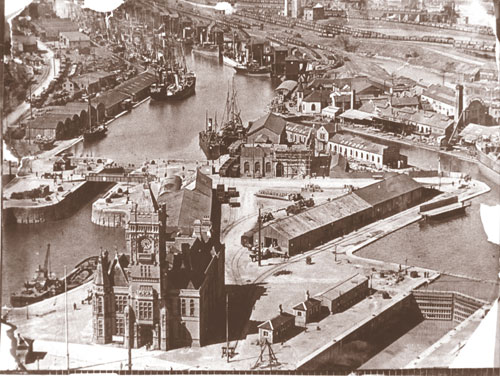 (Above) The building was originally located on the west side of the Bute East Basin, Cardiff Docks, on what is now the site of the Wales Millenium Centre (dark building to the right of the Pierhead in the photo above)

It was occupied by the 'Belfast – Greenock – Glasgow Steam Packet Line' owned by William Sloan of Glasgow from 1889 until the dock was filled in during the 1960s.

Their ships were named after Scottish rivers – the Bauly, the Orchy, etc. The building was used as a transit maritime warehouse holding perishable goods – coffee, tea, sugar, flour, potatoes. It was also served by rail.

The structure is five 20 foot bays long and two 20 foot bays wide. Of particular interest are the wholly cast iron cruciform columns and the manner in which the eaves beams have been constructed out of simple available sections, riveted together to provide the strength required. The use of iron frames ceased around 1880 with the introduction of steel rolling processes. 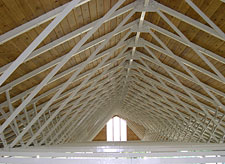 Also of interest is the roof truss design, some of which are embossed with their place of creation - 'Rhymney' a reference to the Rhymney Iron Company.

The rebuilding of the tripartite window on the north side of the building is also of note. A “trade route trail” of bricks on the exterior at the base of the planer glazing on the north and east side of the window depicts the duty levied by Customs & Excise on goods which were moved through the warehouses of Cardiff Docks in 1882.

Unusual additions are a glazed soffit around the “D Shed”and a glazed corridor attached to its contemporary extension.

On the west of the “D Shed” the architects re-created the original sliding doors using kiln dried oak panels sourced from a mid Wales forest as part of the external cladding. The roof is clad in a Welsh slate called heather, which was obtained from the Penryn Quarry in Bethesda, North Wales.

The Makers Guild in Wales was previously based in the Cory’s Buildings in Bute Street from 1998 to May 2002. It was during this time that The Makers Guild in Wales started negotiations and the raising of £1.4 million to move, construct and refurbish the “D” shed. The completed building was short-listed for a RIBA award and includes a contemporary extension finally becoming the Guild’s permanent home on 1st June 2002. The Craft in the Bay building received a – “highly commended” – British Archaeology Award in 2004. The Guild succesfully completed the purchase of the freehold of the Craft in the Bay site in March 2006

The project took over five years to plan and was funded by a myriad of sponsors both large and small who each made a vital contribution to the project in some way. They include Arts and Heritage Lottery Boards; the European Regional Development Fund; Wales Tourist Board; various Charitable Trusts, including The Wright Trust and Garfield Weston Foundation; and members of the public and of The Makers Guild in Wales.

The present building incorporating the structural metal elements of the “D Shed” with a contemporary extension was designed by Noel Architects and built by Mowlem South Wales.

Image Gallery: The ''D Shed'' transformation into Craft in the Bay

In 2012, to celebrate the 10th anniversary of the opening of the refurbished “D Shed”,some images from the archives were located.

Images included below are of the “D Shed” prior to storage or relocation, artist's impression of the planned development, images of the project at an early stage and an aerial image of the site taken in 2005 (note construction of WMC in the top right).